Seriously, my emotions are up, down, and all of the over the place. I want to stomp in my feet in utter frustration, laugh hysterically, and then curl up in a  corner and cry.

All within a two hour time frame.

Mother and daughter are standing by the counter, making a cake. There is a generous amount of flour sprinkled across the counter, on the floor, in the daughter’s hair. The phone rings just as they place the cake into the oven.

The daughter ignores the mother’s request to take the phone and proceeds to run laps around the house, arms extended like an airplane. Mother continues to talk on the phone until the timer for the cake goes off. Simultaneously, the daughter comes out of the bathroom with her pants around her ankles.

The mother visibly hesitates between the call of the timer and the white tush jutting out before her. The poopy bum wins.

Mother is standing by the patio doors watching swirls of white snow slap against the window and turn to ice. Grandma enters the house, wiping the snow off of her shoulders.

Oooh, it’s really storming out there. I had to pull over three times  to scrape the ice off of my windshield.

CLOSE UP OF THE MOTHER, WORRY ETCHED ON HER FACE.

Nobody’s going to show up! Why didn’t I check the weather! Who schedules a birthday party during a fricken storm! I should phone them, tell them not to come. I should reschedule…

Just as she is about to pick up the phone, another vehicle pulls into the driveway…

There you have it. My attempt at participating in The Weekly Photo Challenge: Life Imitates Art.  by trying to recreate a single day into a screenplay.?? Everyone did show up, albeit later than expected. The cake was overdone and dry. Do you know how the secret to salvaging a slightly overdone cake? With some really kick ass frosting! A very special and heartfelt THANK YOU to Lynn for helping to save my tush on that one.

If you are a parent or grandparent, chances are you have one of these in your home somewhere. It’s a great way to record the children’s growth, or how much you are shrinking as time goes by. 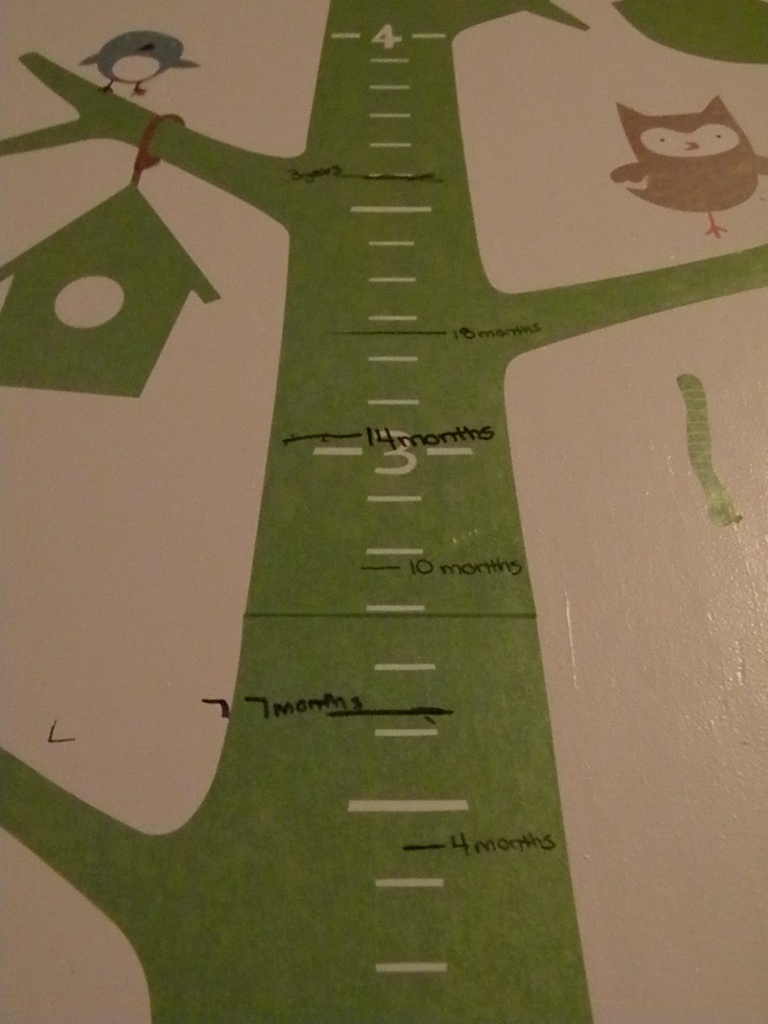 For the Weekly Photo Challenge: Time 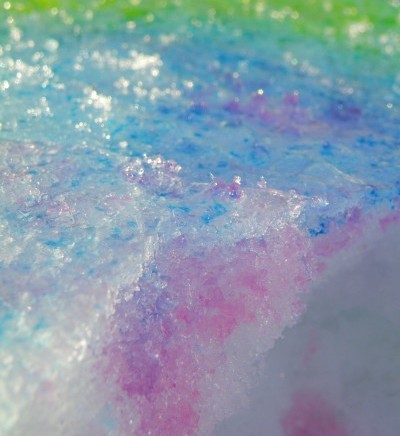 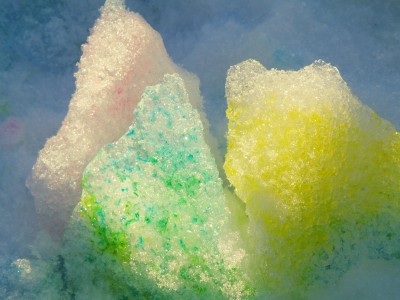 Silly people, who said snow had to be white? This was an idea that I had seen on Pinterest last year. I admit, I was a bit skeptical. When would it ever be warm enough to take spray bottles filled with food coloring outside? Mother Nature was kind enough to grace us with a warm spell last week. As a parent, you have to love anything that your children really get into. 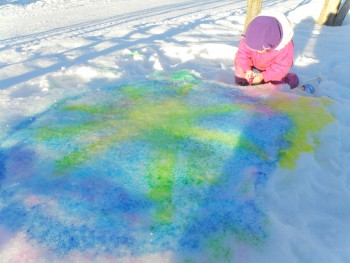 For the Weekly Photo Challenge: Vibrant

In an effort to teach my daughter letter recognition, I have been writing out her name in block letters and getting her to paint them. It isn’t too long before her attention span wanes. She begins to paint her belly and arms and chases me throughout the house with her blue fingers.
Since the Weekly Photo Challenge is Alphabet, I will share her current rendition:

I kept wondering where she was getting the candy from….

For the Weekly Photo Challenge: Treat

Where do I go
When life is a little rough
I get on my knees
And look in her eyes
For me, that is enough

When her blue eyes are twinkling
And she is giggling with glee
I can’t help but laugh with her
And wonder
“How am I so lucky?”

If I could preserve her spirit
And bottle up her energy
I could sip it,
Like medicine,
My little homemade remedy

My written response to “Where is your happy place?”

She began to help with breakfast
A simple, daily chore
She cracked some eggs in a bowl
And dumped them on the floor

And where would I find her?
But well beyond the trees
Up on the road, with the dogs
Acting just like the puppies

The rest of my day was filled
With very similar events
Forgive me for complaining
I just really needed to vent!

Now she is tired and cranky
Clinging on to my knees
So if you have some extra patience
Could you send me some, please!

I needed to let you know, mama, that I am still thinking of you. If you were here I would let you braid my hair like you used to. I might let you brush it if you promised to be gentle. Maybe you could cook for me, and we could measure your “little bits”, so I could get it right, because, somehow, when I try, it just doesn’t taste the same.

You should see my girl mama. She looks a lot like us, she has our eyes. She reminds me of you even in her young age. She likes to dig in the dirt and pull out the flowers. She thinks she is weeding. And, yes mama, I am trying to teach her just like you taught me, but she doesn’t like to listen all the time.

I need to thank you mama, for all the love you gave me because now I know how to give it to her. I hope I give her enough to help her through her hard times just like yours helped me. I hope she can carry it with her and pass it onto her own family.

They were the butterflies you pulled off of the grill of uncles’ truck when he came for a visit. No mama, it isn’t gross, and don’t tell me to throw them away. They have kept well all these years between the glass and they remind me of you. You touched these wings , you preserved them, you found beauty in their death. I keep them beside my bed as a reminder of the lesson and I hope you have found beauty where you are too. xoxoxoxox

When you come across a truly wonderful idea like this one , you just have to share. Pssst pass it on.

I really do appreciate you thinking of me, but I am award free . :)
Follow honestme363 on WordPress.com

Unless otherwise stated, all words and images are under the copyright of the author of this site. They may be used only for non-commercial sharing purposes, with provision of links back to this site and full acknowledgement of the work to the author.

What I Write About…

What you have thought…